Around the year mark of my service, I started getting serious about my future and where I wanted to see myself going. It wasn’t that difficult that I decided to pursue a career in law and work specifically with labor unions and employees within the hospitality industry. After all, I majored in hospitality management, worked in the hotel industry for four years prior to joining Peace Corps, and helped establish an operating hostel. So like it or not, my life is hotels; it’s a good thing I love them.

Leading up to October, I cracked down on studying the legendary LSAT. It’s a lot harder than it looks for someone who lives with little to no Internet and no books to study from. I studied for 8 months and decided I was as prepared as I could be for a test in a Third World Country, so I ventured to South Africa for this proctored nightmare.

After the initial shock of how much a flight was to go three hours from Madagascar and back, I decided to add on extra days and enjoy the country. A friend I served with decided to accompany me and we spent 5 days soaking in the sun, and the San Diego like atmosphere of Cape Town.

Johannesburg was our first stop, home of University of Wits, which I learned was pronounced with a ‘v’ sound. I took the test in a huge 400+ table lecture hall with 3 other people. Shout out to the two Botswana Peace Corps Volunteers I met. Hope the sandy desert is treating you well. Although scores will not be posted for another week, it went poorly. I was distracted by the beeping of two different timers (who sets a timer for 30m and then sets another for 5m for 35m sections? My proctor, that’s who) and a silent snore of my proctor during the last two sections. But, optimist thinking. I got that 180…..when I was in the Land of Oz. I strongly remember walking out of the university to meet Monica outside saying “tena mila taoka” (I really need alcohol.)

Our next stop, Cape Town, or more specifically, a small 5 star game reserve 3 hours outside of Cape Town. Many people may wonder why we didn’t experience Krueger Park, the wildlife park so famous for the number of animals you can see in one short game drive. There is location reasons in regards to proximity to Cape Town, but there is also personal ones as well. Prior to joining Peace Corps, my views were not cemented regarding a large variety of topics. However, nearly two years in, I have firm views. Krueger is said to be amazing to experience, where you can suddenly come upon a herd of elephants, but the population of animals to size of land is rapidly growing and there is not enough space for the animals to comfortably live and not be confined. The owner of Inverdoorn, however, considered each animal in the reserve and calculated how much land each animal would need. Inverdoorn also specializes in cheetah conservation, something I find very interesting. Many people associate white rhinos with endangerment because of poaching, but cheetahs are also endangered. There is less than a total of 25000 cheetahs remaining across the world, and passing of bad genes, is making it even harder for them to reproduce.

We spent a total of two days at the game reserve, taking in all the wildlife on a total of four game drives and relaxing by the pool. We didn’t see the Big 5, those sneaky leopards, but we did see the Big 4. During that time, we came across a wide variety of people. One of our game drive guides was so anti-government, he hinted to Peace Corps as a form of brainwashing. The other, a Kenyan native, was not afraid to share his story, even though it was filled with sadness (he watched a rhino die from poaching and a friend be killed by a lion). We met other Americans traveling overseas and I painfully tried to speak French to a couple who knew no English.

When we returned to Cape Town, Monica and I ventured out on a wine tour going by the name ‘Wine Flies’. Five vineyards in six hours. Some of the most fun I have ever had. It started out slow, everyone quiet and shy, but obviously as the alcohol started setting in, we got chatty. I met a set of British friends, who to my amusement, knew more about pop culture than me. A good-looking 24 year old male who knows the names of every One Direction singer and who’s dating/engaged to who and didn’t think it was crazy that I was bringing my dog home….sir, will you marry me? (That’s a joke, but I would have considered it if he asked). I even got a bottle of my favorite wine from the day…for $5.

But by far, the highlight of my trip was the Cape Town Tour. We hired a semi-private car to take us to Cape Point and my favorite stop, Simon’s Town, home of the South African penguin. Behind the Californian cow, penguins are my favorite animals and these ones were so dang cute. We got to see them up close and personal, some just a foot or two away, but remember, as the signs posted all over said, “Penguins bite.”

South Africa was a great experience. And I’m glad I spend a little bit of time there. I probably won’t ever be back, so the extra time was worth it.

Up close with the cheetahs at the conservation center 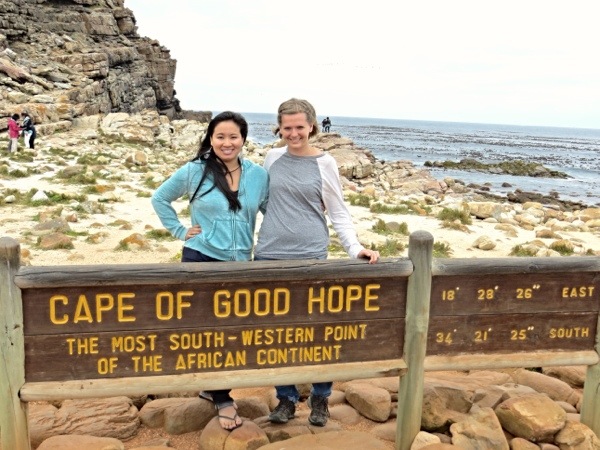 My favorite picture I took the entire trip. Does the view justice.

A baby rhino the owner of the game reserve adopted when she and her brother were found crying over their mother, who was killed by poachers. 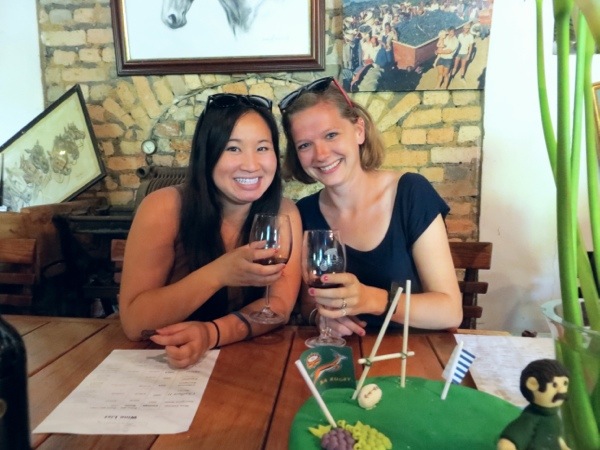