I would say yesterday was our first real taste of traveling Mada style. We have the luxury of having PC drivers whenever we go anywhere, but for our IGA, we had to travel like the Malagasy do.

What is an IGA you might ask? It stands for Income Generating Activity. As a CED volunteer, we have multiple projects during training as a sort of qualifying project for Swearing In. For this IGA, we were divided into groups of three to four and we had to create a feasible business and sell our product in Manjakadrina Market (1.5 hrs drive from Mantasoa). My group, Aaron, Lance, Daniel, and myself decided to create a business around friendship bracelets and selling the American custom. After all, we had the Vazaha factor and people might buy stuff from us because we are fotsy (white).

The thing about Mada is they work off of foton-gasy time, meaning no schedule at all. We confirmed with the taxi brousse station twice they would have a taxi brousse waiting for us at 5a Monday morning. The 14 of us showed up at the station at 445a, still pitch black, and surprise, no taxi brousse. Almost an hour passed, nothing. We were told we needed to be at the market by 630a to start selling our products. Randomly a truck passed by and asked if we needed a ride. Our heads told us “Johanesa (our SSO/Safety and Security Officer) will be so disappointed in us if we take this ride,” but we had no other choice. We needed to get to the market. That was part of the task. And all of us were together so we were each other’s security. Well, do you think 14 of us could fit into this car?

The correct answer is no. We realized pretty fast, it wasn’t going to happen. 8 were able to fit, but Aaron, Lance, Daniel, Eric, Emma, and I were not. We told the other volunteers to go ahead. Some of us HAD to make it to the market, we would figure out another way.

At 630 a taxi brousse finally made it’s way down the lalana. Yay! We scurried in and got seats and settled in for the bumpy ride. As we continued through Mantasoa, more and more people got in. We estimated it was a 15 person van (sitting comfortably). The final number after we started moving, 33! Some hanging out the back, some squatting in between the seats. When I got in originally, I put myself beside who I have dubbed my protectors in my Stage, Eric and Daniel, and I couldn’t be more thankful. People were squished together and the Malagasy really don’t have an understanding of personal space, so it was reassuring to be squished up against two friends rather than a random Malagasy man. And boy was that ride fun. We had to get out once while the brousse navigated through a muddy portion in the road which I later found out the first group had gotten stuck in and had to push their car out off.

But, we survived! And made it to the market, just a prompt nearly 2 hours late. Our product sold, we ended up making a profit of 2700a, a little over $1, but by Malagasy standards, enough money to feed themselves for the day.

Here are some photos below from our adventure…and thanks to Leslie and Aaron for providing these awesome photos. 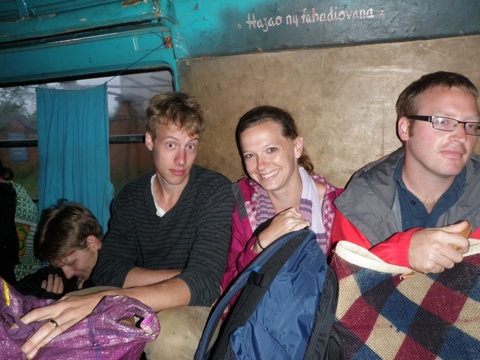