When planning our trip across Southeast Asia on our way home to the United States, Amy and I sat down and looked through the guide books to see what we would want to do. The entire point to making the voyage out to the Borneo Island for us was Sandakan. Sandakan is small oceanside city on the Malaysian side of the island that is the transit point to Sepilok, the home of the Sun Bear Sanctuary and Orangutan Rehabilitation Center.

I remember the moment that Amy and I got off the plane and were waiting in the taxi line and an elderly tourist stopped me.

“Excuse me miss? Can you tell me why there are so many young individuals flying to here?” he asked me.

“There’s an Orangutan Center thirty minutes away from here,” I responded back.

“Oh….I thought it was something more exciting,” and with that he turned and walked away.

More exciting? What can be more exciting than visiting a center that is only one of four in the world? The world, people!

Sepilok is an easy taxi ride from the airport. We discovered early on in our travels, that when having to take public transportation, it was typically easier to take a taxi, then local buses. Not only in efficiency, but because with local buses, you have to change buses to get almost anywhere. It is also really convenient, and overall, not that expensive. At any airport, you go to the taxi window, tell the attendant where you are going, they charge you a cost, you pay, and then you give the ticket to taxi driver when you go outside. It prevents greatly from the taxi drivers scamming you by running up the meter, if it even has a meter.

There is no dirt cheap place to stay in Sepilok. The luxury hotels monopolize the area, but the Long House offers a somewhat inexpensive accommodation. Food however, good luck. Look to be spending US prices eating the simplest meals on the menu. That’s just the way it is. The hotels are the only option for eating.

The Orangutan Rehabilitation Center is open all day for hiking, but there are only two feedings to see the orangutans, 10am and 3pm. If you want the best value for the ticket price, go to watch both feedings. If you have two days in Sepilok and you won’t make the first feeding for the first day, put it off and go to the Sun Bear Sanctuary instead. Right across the street, and pushed out of the limelight because of the orangutans is the sanctuary where the world’s smallest bear lives, and they are worth the visit. They are some of the cutest animals I have ever seen, and they climb trees! We spent three hours without even knowing it watching them climb up and down trees. 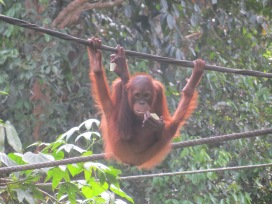 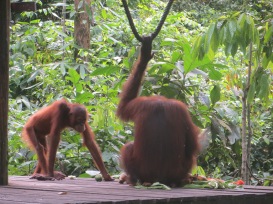 Apart from the Sun Bears and Orangutans, Sepilok is also home to the Rainforest Education Center, a great place to take a hike and bird watch if you have extra time, and learn about the plants that call Malaysia home. But beware of the humidity and the leeches! They’ll get you every time. 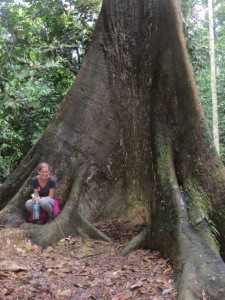 Amy and I spent a total of two nights in Sepilok, and left the morning of the third day to our final Malaysian destination, Kuala Lumpur. We had intentions to make the trip to Kuala Selangor to experience the fireflies, but with traffic getting back into Kuala Lumpur from the airport, we missed the last bus out, meaning an extra night in Kuala Lumpur, doubling our time in there. We ended up staying at The Pod Hostel, one of the coolest hostels I stayed in the entire trip. The dorm rooms were the same, but the individual room we slept in the first night since nothing in the dorms were available was very “pod”esc, something I enjoyed.

The reason we only allotted two days to Kuala Lumpur was mainly because it was just a stopping point on the way to Thailand. We did want to visit the Batu Caves and two friends from our Peace Corps group were in town as well, so our days were planned, and only two were needed.

Everyone that travels through Malaysia has heard of the Batu Caves. It is a religious sight, known for its tall statue guarding the stairs and the entrance of the cave. It too can be easily reached by the local metro system, costing roughly $4 round trip, dropping you off right at the entrance. It would be beneficial to do some cardio in the days leading up because those steps will definitely cause you to be winded by the time your reach the top. You can be blessed at any one of the temples, giving a dollar or two donation in return. I have never liked when people make a religious site a tourist trap by ‘selling’ the experience, but Batu Caves does it in a very classy way. Monks are walking about, using the grounds to further their faiths, and overall, tourists are very respectful of what areas are designated tourist and what remain for their original purpose. 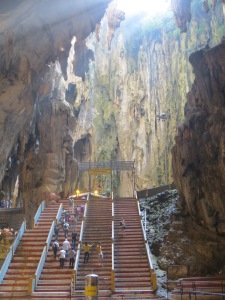 Malaysia was a whirlwind of 7 days and a lot was accomplished in that time. There was little time to relax, but rather take in the sights, and the rest of our trip would be the same as well. On to Thailand, starting with a flight into Chiang Mai.