In previous posts, I mentioned and covered my views on extraneously large projects and the unfortunate circumstances in which they tend to fall apart when the volunteer leaves. I still stand by that reasoning. But I also believe that if the community donates enough time, money, and effort, chances remain strong that the project will be sustainable. During the two years I spent in my village, I spent a large amount of my time with a family of artists. They are extremely gifted painters who just needed a little bit of direction and focus. It took the better part of a year to convince the family I could help them with constructing a boutique, they just needed to provide a minimum of 25% of the total costs, and that boutique was as good as theirs.

Eventually they came around, and the paperwork was started. Originally, the boutique was going to be a one room, one floor house. That was how much money I submitted for. However, after the project was approved by Peace Corps and started sitting on the web waiting for money to be collected from generous donors, plans changed. It should always be assumed, especially in Madagascar, nothing ever stays the same. Surprise! We’re adding a floor so that a guardian can live above. They did understand though that these added costs would be coming out of their funds and were more than willing to add this to the contribution.

Construction started November 2013 and while it was supposed to take two week maximum to complete the build, we did not officially place the last nail until mid January 2014. Multiple things prolonged the construction. Workers fell ill. Supplies ran out. The artisans had other jobs. I had to travel to Peace Corps meetings. The organization couldn’t agree on no date for their training. Eventually however, the boutique was finished, painted, and experienced their grand opening party.

I was really lucky that there were a lot of volunteers in my region that came out and supported me on this special day. They do say Peace Corps becomes a family to you, and that is very much true. Maybe that was why so many people stopped to see what was going on. Alakamisy is used to two white people in their town, not 8 foreigners. We played traditional, easy party games that would be able to be explained in Malagasy and surprisingly, they were a huge hit. Kids and stopped partook in the simple games of egg tosses and pin the tail on the pig.

When I left site last week for good, Hasimira, the head painter of the organization was painting one wall of the boutique with a mural. It was incredible to see what he could do with just a few paint brushes and some paint and it was a great cumulation of my time at site, the friends I mad,pet and the projects I worked on.

Thank you so much for the donations everyone. You made this boutique possible. Mihone Artisan Association appreciates you and so does Alakamisy in general for that matter.

One of the construction workers daughters 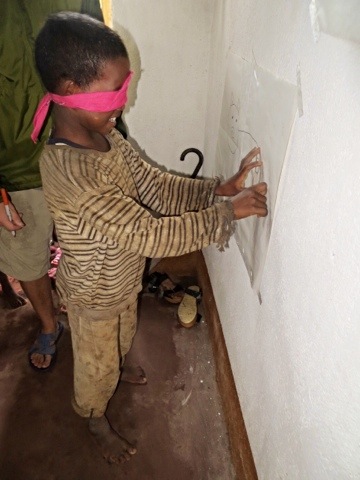 Pin the tail on the donkey 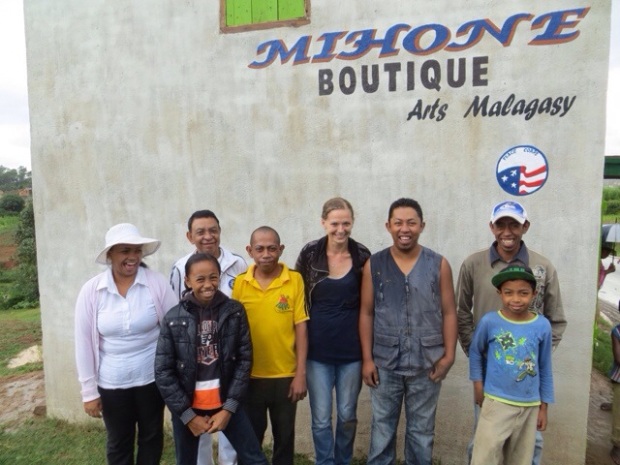