When you join Peace Corps, you are bitten by the travel bug. You want to go everywhere, see everything, and experience it all. I traveled through four different countries on my way home after finishing my service. First stop was Malaysia. It was a bit unfortunate that I visited the country a mere month after the Malaysia Air flight went missing after takeoff. That was all anyone could converse about. I was even a little hesitant myself to get on a plane when more than 5 countries and 13 military ships couldn’t find the wreckage of the plane that supposedly went down. With that being said, I tried to not let the conspiracy bring down the expectations I had for traveling. A little easier said than done. The nearly two months of traveling involved 9 flights. I took one flight at a time, and enjoyed the each destination reminding myself nothing ever comes from being worried.

If you know me, you know I have everything planned out. I want to know where I’m going, and when I’m going to get there. Something I didn’t research, that now I look back and realize I should have, was airports. I assumed that when you arrived into one airport and you have a connecting flight in the same city, you just need to walk to the gate…wrong. Note to any backpackers who might be traveling through Southeast Asia, or more importantly Kuala Lumpur, and happens to stumble across this post, there are TWO airports. One for any international flight and one for regional transportation/Air Asia. They are not in the same airport, and more detrimental, they are not close to each other. I allowed two hours in between arriving in Kuala Lumpur and catching a flight to Kota Kinabalu. I believe a little over one hour before our flight was supposed to take off, a nice gentleman told us that we needed to get to another airport, 30 minutes away. Queue panic mode.

Air Asia terminals are laid out strangely. They screen your bag before you get to the counter. You check in online, preferably twenty four hours prior to your flight, which is when your seat is assigned unless you pay the extra few dollars to pick your own seat. I have also noticed that when you fly with Air Asia, the first seat they assign you tends to be the seat whereabouts you are assigned for the rest of your travels. I never sat in a row less than 22 which my friend always seemed to be sitting around row 9. When we arrived, t-minus 30 minutes to the terminal, we rushed through the lines trying to get through security before our plane took off. Success!
After a short three hour flight to the island of Borneo, we landed at our first destination, Kota Kinabalu. After checking into our hostel, we went searching for food, and our first meal outside of Madagascar ended up being chicken livers and rice. We found some small hole in the wall place right around the corner from our hostel, and the cravings for rice lead us into this little establishment. Filled with Malay individuals who all gave us a puzzle luck as to why two Americans were eating there, we ate our meal, discussing that although we may have left Madagascar, we never really left our picked up habits.

The entire reason for visiting Kota Kinabalu is to climb Mt. Kinabalu and visit Tunku Abdul Rahman Park second. In order to climb Mt. Kinabalu you need a climbing permit and reservation, something we didn’t get, so that was out. Second choice, Tunku Abdul Rahman Park. A national park of four islands, it is a relaxing place to snorkel and enjoy the ocean. Tour companies will try to sell you a package tour for nearly triple the price of what you would to walk down to the port and buy the boat hopper ticket and snorkels yourself. Backpackers are all about pinching pennies, so walking and figuring out the program yourself means adding a nice meal to your schedule later on. When visiting islands however, make sure you mind the hundreds and hundreds of jelly fish that hang out on the shoreline. 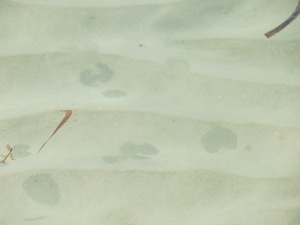 Kota Kinabalu also has an amazing food night market, one of the best I saw in the two months traveling. Descriptions can’t even do it justice. Just look at the photos. Fresh fish and seafood, coconuts, and very hospitable people working the stations. 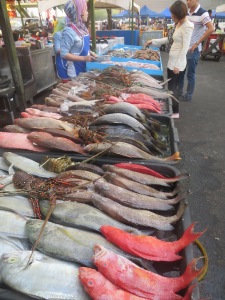 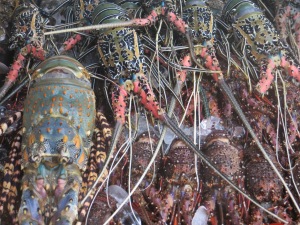 There are so many tours taking off from Kota Kinabalu to other locations. We opted to see the summit of Mt. Kinabalu and the Poring Hot Springs for our last day in town. The massive size of Mt. Kinabalu alone was worth the trip, but personally, I felt Poring Hot Springs was completely overrated. It had been commercialized to the point that it lost its raw tourism aspect and felt more like a water park than anything. For those that want to really “experience” the island, I don’t think I would ever recommend it as a destination. For a family outing, it would be perfect. But if you do end up venturing out that direction, you can get a free pedicure in the waterfall behind the rope bridge at Poring from the little fishes that eat dead skin. 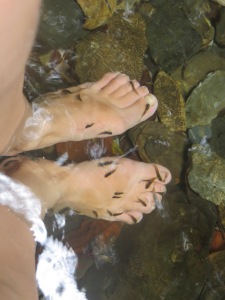 The views expressed in this blog are my own personal opinion and do not reflect the views of the Peace Corps.
Loading Comments...